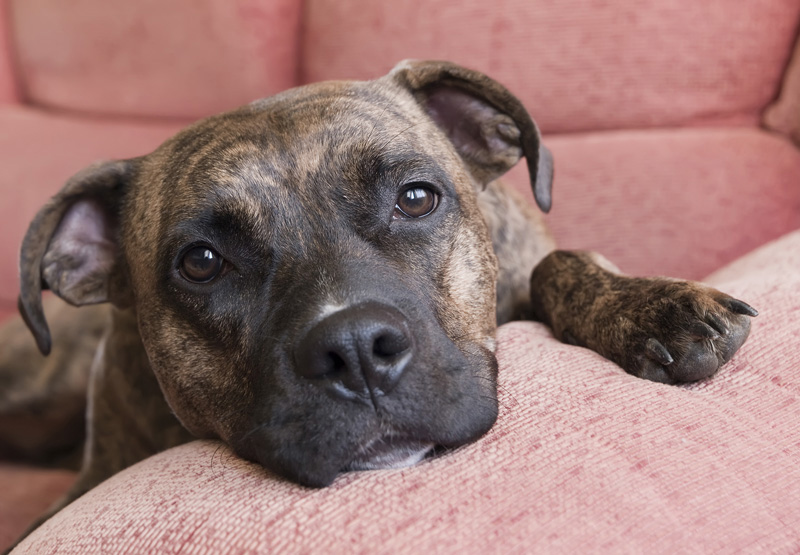 Just like their human owners, dogs all have different personalities. Some pups are energetic and outgoing, while others are shyer and retiring. However, a few dogs are downright scared of many aspects of life, including meeting strangers and unknown dogs or even simply visiting somewhere new.

In this article, we discuss ways in which you can help a fearful dog gain confidence and start enjoying life to the full.

Why Are Some Dogs Fearful?

It’s common for all animals to feel fear.

Generally, fear comes from a lack of life experience or genetic predisposition.

However, some dogs that have experienced trauma or abuse at some time in their lives can become fearful in certain situations.

For example, if a dog shows signs of fear when confronted with a crate, that could be because he has been confined in an uncomfortable crate or kennel for many hours at a time with no human interaction.

In many cases, dogs that are frightened of being crated have been shut in a crate as punishment for bad behavior in the past.

How To Tell If Your Dog Is Afraid

Just like you, your dog will avoid anything that they find frightening. If the dog can’t escape the cause of his fear, you might observe any of the following behaviors:

If your canine companion does any of those things, don’t try to force him to confront whatever is causing his fear.

For example, if your dog growls at your friend’s dog they’re meeting for the first time, don’t insist that the two get along. Growling is your dog’s way of telling you that he’s uncomfortable. If you push your dog into a situation he’s unhappy with, he might snap or even attack the other dog.

Instead, cut your furry friend some slack, and let him have some space.

At all times, be aware of your dog’s body language and learn how to know when your pet feels afraid or stressed.

Can My Fearful Dog Get Better?

To some extent, a fearful dog can become more confident and learn to overcome his fear in certain situations.

For example, a dog that is afraid of being crated can often be made more confident through patient, sympathetic, and correct training.

However, even if a fearful dog becomes less afraid, he will probably never be sociable and outgoing. Being nervous and shy is simply a part of that particular dog’s personality, and that can’t ever be changed.

So, a fearful dog is not the best choice if you’re searching for your first family pet. Instead, choose a confident, outgoing breed that quickly and without stress adjusts to a busy family home.

How Can I Help My Fearful Dog?

Dogs learn through positive association. So, the best way to help your dog overcome his fears and become more confident is to expose him to a potentially frightening situation at a lower intensity and in a controlled environment.

This process is called desensitization or counter-conditioning. When done properly, desensitization can help your dog feel less stressed and more comfortable in a situation that usually makes him uncomfortable.

Here are some top tips on how to help your dog overcome his fear of meeting new people:

If your dog is fearful when meeting strangers, always say “no” if someone approaches your dog and wants to pet him.

Don’t feel bad about stepping between the person and your dog to prevent an interaction. That gives you time to politely explain that your dog needs his own space around folks he doesn’t know.

Give your dog plenty of time to get used to new people.

Ask strangers to ignore the dog, and let your dog decide whether they want to get social with the person or not. Dogs that make the first move are generally less fearful and more confident.

The Eyes Have It

Do not make direct eye contact with a frightened dog.

That can be extremely intimidating to some dogs and might even be viewed as a challenge or a threat. Instead, look down and to one side of the dog.

Don’t stand over a dog. That can be extremely intimidating and frightening to some nervous pups.

Instead, sit down or crouch so that you’re approaching the dog on his level.

Most dogs enjoy treats. When approaching a fearful dog, crouch down at a safe distance from the pup, and toss out a treat, one at a time.

Allow the dog to approach when he’s ready to collect his reward. Do not be tempted to try to interact with the dog until he’s ready to take a treat from your hand.

When petting a dog, always stroke him on his chest or under his chin.

Don’t pat the dog on his head. Most dogs hate that!

Before you try taking your dog to potentially scary public settings, such as a friend’s house, the dog park, or a dog-friendly pub or cafe, take time to build your dog’s trust.

Pushing your dog into a potentially frightening situation too soon will put back his progress.

Many dogs are fearful of meeting other canines. That’s often because the dog has been attacked previously and now associates that bad experience with encountering strange dogs.

Never force your dog to interact with another dog if he clearly doesn’t want to. When out walking your dog, be ready to move off the path or cross to the other side of the street to give your dog plenty of space.

Fearful dogs can be just as loving and affectionate as their more confident, outgoing counterparts.

Never force a nervous dog to confront a stranger or an unfamiliar dog. Always allow the dog to make the first move and avoid taking him to places that he might find stressful. Gradual desensitization is the best way to help a frightened dog become more confident in situations that make him nervous.

Always seek professional advice if you’re not sure how to help your fearful dog yourself.

Questions? Interested in being featured on this blog? Email us >
Posted on
in
category

The benefits of adding a pet to your family

And Tips For Taking Care Of It

Finding a New Feline Friend: Why You Should Adopt A Cat

And Tips For Taking Care Of It

END_OF_DOCUMENT_TOKEN_TO_BE_REPLACED

All About Veterinary Pathologist Job

Veterinary pathologists are professionals that investigate and diagnose diseases and other conditions by examining animal tissue and bodily fluids. This article is for you if you still want to know more about this profession

END_OF_DOCUMENT_TOKEN_TO_BE_REPLACED

Wet Food vs. Dry Food vs. Mixed: Which Option is Better for Your Dog?

If you're wondering whether to feed your dog wet, dry, or mixed food, this article is for you. Check out Redford Naturals dog food review to learn more.

END_OF_DOCUMENT_TOKEN_TO_BE_REPLACED

Everything You’ll Need When Traveling With A Cat

A Guide To Items You’ll Need For Your Feline To Travel.

Read on to discover exceptional ways of making your gaming experience

END_OF_DOCUMENT_TOKEN_TO_BE_REPLACED

Everything You Need For Your Feline First Aid Kit!

END_OF_DOCUMENT_TOKEN_TO_BE_REPLACED

Is it True: Do Cats Sleep More in the Summer?

A Guide to Why, How Often, and When Cats Sleep

END_OF_DOCUMENT_TOKEN_TO_BE_REPLACED

What You Need To Adopt a Cat: A Comprehensive Guide

A Guide To Everything You Need to Adopt a Cat, Including How Much Each Item Costs