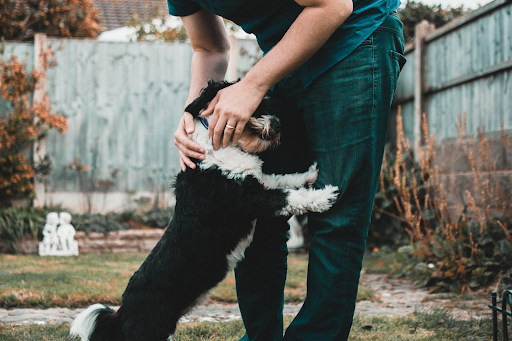 So you’re at the park, playing catch, everything is great (how could it not be, there’s all these dogs!) and then in an instant, snarl, snap, cry, your perfect little pupper is bit! You go to the vet, get your dog fixed up, and go home to cuddle. (and if the wound isn’t quite bad enough to merit a trip to the vet, see How to Treat your Dog's Wound). But that isn’t quite the end of it.

In this article, we here at Fauna Care will share the four stages of dog wound healing, so that you can be sure your best friend heals up just right.

Save this in your phone for a quick reference:

While there are many types of dog wounds, from lacerations to abrasions to puncture wounds, most wounds go through similar stages in healing. The first of these stages is inflammation, and while it is the most painful and most noticeable stage, it is key to proper healing.

Cool, but, what exactly is inflammation? Put simply, it is the body’s immune response to injury. Injured tissues send chemical signals to initiate the healing process: first, capillaries (fine branching blood vessels) leading away from the injured area are signaled to constrict, and the arterioles (arteries leading into the capillaries) are signaled to dilate, increasing the flow of blood, white blood cells and fluids to pass through the injured area.

These fluids have a higher protein count than those normally found in tissues, attracting water to the injured area and causing, you guessed it: swelling.

The cells that migrate can be considered your pup’s “first responders”, controlling bleeding and allowing for the second stage of healing to begin.

The five symptoms of inflammation are swelling, pain, redness, heat and immobility. That red and inflamed look is normal unless accompanied by high fever, excessive bleeding or streaking from the site of the wound.

It may take up to a week for inflammation to subside, depending on the severity of the wound and the overall health of your dog. You’ve also got to watch out for infection, symptoms of which are also pain, redness and heat. Pro tip: if your dog’s wound smells funky, it’s probably infected.

Here’s how to know if your dog's wound is bad enough to go to the vet.

Debridement (Starts in a Couple Hours)

Debridement happens in one of two ways: if the wound is acute then those white blood cells that have flooded the wounded area then act (as I like to think) as an attack squad, removing all foreign material from the wound, killing off infection causing bacteria, clearing debris and removing dead cells. This process occurs naturally and on a cellular level.

However, if the wound or the skin surrounding is blue-black, leathery, thin or white, it is often associated with non viability, and necrotic (dead) tissue will have to be manually debrided by a surgeon.

Debridement can be classified as:

Forms of debridement include:

Dead tissue is harmful to the body’s ability to recover as it inhibits the ability to development new, healthy tissue, makes the wound site more susceptible to infection, and can hide already present infection, therefore allowing it to spread.

Repair (Starts in a Couple of Days)

Your Pup’s Building Up that there Healthy Tissue

Less startling than debridement the repair stage. In a healthy, non infected wound, cells begin to grow and rebuild missing and damaged tissues. Small blood vessels develop to carry blood to the wound site. Skin cells migrate and form scabs within hours of the initial wound.

These skin cells can cover a properly closed surgical incision within forty eight hours, if this is the origin of your pup’s wound.

However, if it is an open wound, granulation tissue, the new connective tissue that forms when the surface area of a wound is healing, takes longer to form. Granulation is a sure sign of healing and should be promoted for healing.

Granulation tissue is usually deep pink in color at the base with red ‘lumps’ all over the surface area of the wound. It will also be moist, usually raised higher than the surrounding flesh, and typically bumby (hence the term, granulated).

While the color of it may be frightening, granulating flesh is healthy and means that your dog’s body is creating a new layer of strong, protective flesh. You can play a part in cultivating this strong new layer of flesh for your dog by keeping a moist, warm, clean wound surface, which will control exudate levels (drainage) and prevent damage to this delicately forming tissue.

Check out Fauna Care’s First Aid Spray for a hands-free, sanitary way to keep your dog’s wound moist and clean.

Your Pup’s (Mostly) All Better!

During the repairing stage, the collagen that was laid down was disorganized and thick. Not a very attractive look for any species.

So, Mother Nature being as smart as she is, has created this final stage of healing, during which the newly laid collagen fibers reorganize. Collagen is aligned with tension lines and water is reabsorbed to come closer together and cross-link. Cross-linking reduces scar thickness and also make the wound stronger.

Warning: this process can take months or years, and even then, wounds are only 80-85% as strong as they were, pre-injury.

A happy pup, for one! And most likely a scar, but the wound should be closed and dry.

There you have it, the four stages of healing. Watch out for these, and if your pupper hangs around in one of these steps for more than their due time (or, you know, your dog’s leg is gushing out blood), be sure to call your vet right away!

There’s nothing like the summer sun, but the heat is no joke! Keep your dog cool with these quick and easy recipes.

Why is My Dog Licking So Much? Excessive Licking and How to Stop It

While slobbery kisses and long grooming sessions are usually peak cuteness, obsessive licking can also be a big problem for your dog.

How to Protect Your Pup's Skin From the Summer Sun

While there are times where it seems there is no such thing as too much sun, that’s not the case in summer. Learn all the best ways to keep your dog’s skin safe in the summer heat here!

Seasonal Depression In Pets: Do They Have It? (And How To Treat It)

When the weather turns sour, so might your pet’s behavior—this is how to identify it.

Dog Tear Stains: What They Really Are and How to Prevent Them

Those brown streaks under your dog’s eyes may be worrisome, but they are no cause for alarm.

So many pet healthcare products, so little time! Let this article be your quick and easy guide to finding pet care products safe for use on your pup.

The Best Way To Clean A Dog Wound (With Instructions)

Keep it clean, keep it drained, and keep your dog away from it

My Dog's Sore Won't Heal, What Should I Do? (Tips on Diagnosis, Treatment, and Vet Care)

Any time your pet gets hurt is stressful, but when the wound just won’t go away, it’s easy to find yourself at a loss.

The Best Products to Soothe, Nourish, and Protect Your Perfect Pup's Skin

Is your dog itching and scratching up a storm? Well, never fear! This skin care routine will leave your pet with soft, healthy skin and a glowing coat to match.

Sores can be indications of a greater skin issue your dog might have.

Yes, you should brush your cat’s head with a toothbrush, it’s hilarious, and here’s why.

Clamp down on the chaos with these five products.

Don’t let your dog become a pupsicle! These products will guarantee that your pet feels warm, safe, and loved all winter long.